Lovejar began as a drum & keyboard duo in 2003. Mikey played a Fender Rhodes piano and Rheem Kee Bass, Dave played drums and sang. Inspired by the sparse instrumentation of contemporary hip-hop hits, Lovejar capitalized on Mikey's dexterity as a keyboardist to create a surprisingly full sound. 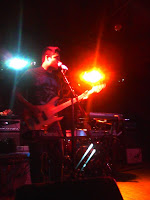 They got their start playing small music venues in Fullerton, CA, often opening for local legend Mike Barnet. Over the next several years, Lovejar played odd shows, recorded some EPs, and made a few videos for YouTube.

In April of 2010, the band began work on what was to become their debut LP, "Are You Listening?" Recorded with no budget in a garage, the album features all new material and is entirely self-written, recorded, produced, and mixed.  While preparing for the release of their debut album, Dave and Mikey added virtuoso drummer Pharaoh Merchant to the lineup, although he was not featured on the album. Pharaoh's drumming quickly became a focal point of the band's live show.

After the completion of "Are You Listening?" Lovejar once again began performing regularly in support of the record, sticking exclusively to original material. Kevin Darish, a veteran of the LA scene, soon joined the mix, filling in the spaces and adding new dimension to Lovejar’s live performances.

As of early 2011, there are already plans to record a new live album featuring Pharaoh on drums and Kevin on bass, guitar, and vocals.